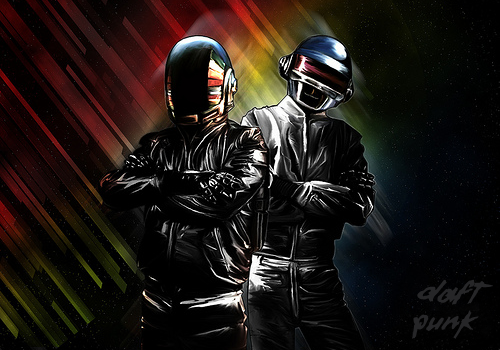 I am sitting and listening to Daft Punks liverecording Alive 1997, an 45 minute long recording from an live-set in Birmingham 1997. The Swedish writer Kristofer Andersson wrote an blog entry about the Android-duo for the site Throw Me Away.

–Mr. Andersson, you listened to Alive 1997 and I Alive 2007 (because this is the way the begins the text, a fake conversation with Guy-Manuel de Homem-Christo and Thomas Bangalter)

I thought it would be a clever way to begin this post.

The second half of 2007 was my second year of high-school. My musical interests goes through some changes during this time, I go from mainly listening to Metal and classical Rock to a more wide taste in music.

I went from carrying around a portable CD-player containing Helloween’s Keeper of the Seven Keys, Judas Priest’s British Steel, Jimi Hendrix’s Axis: Bold as Love or any other record from my large CD-collection on which I spent all my money. To having a Mp3-player in my pocket with some Punk-classics like The Clash, Heavy Metal-legends like Iron Maiden and the animated alternative hip-hop group Gorillaz or the radio hit Crazy by Gnarls Barkley.

What I also like about the transition from CD’s (I might have held on to these for longer than what was necessary) to Mp3 is the fact that the last package of records I bought through the internet (I didn’t even buy my music through a record-store, the one thing physical music media had over digital) had both the Strokes and the Killers debut albums. The Strokes with its nude womanly hips on the cover was something I had dismissed until now, I had seen there music video for Heart in a Cage and wrote the off as the kind of music I wasn’t into. And that’s the reason why I dissed them at the Hultsfred’s music-festival ’06.

I would like to say that it was through Queens of the Stone Age that I found a lot of new music to take in. Of course it wasn’t just through QOTSA that I started listening to other music, but they are a good band for a person who likes heavy-metal to transfer to other genres as they do have a mixture of metal, rock and pop in there music. And of course the great, and greatly over-played hit Crazy by Gnarls Barkley which showed me that songs that get air-time on the radio can be pretty great. Must also mention that it actually was through a mistaken google-search of Danger Mouse that I found out about the amazing band Modest Mouse. And it’s also right around this time that I saw the movie Big Nothing for the first time and fully embraced the Eels.

Sometime in December ’07 I woke up and from my bed watched Fredrik Strage’s (a Swedish music-journalist) appearance on Tv. His Tv-presence back then always felt like it came when I needed, I didn’t know he was going to be there but when he was he would share some much needed knowledge with me. Kind of in the same way High Fidelity felt like it would be on just for me and my teenage love problems sake. This time he would share the coming live-album from the french house group Daft Punk and show a video of a big party, with an enormous light show and two robots standing on top of a giant pyramid, performing in front of thousands of people who were dancing, rubbing their sweaty bodies together and just had a good time.

It was never like I was going to transform into some other person now, not like I was going to throw away my black leather long-coat and my steel cap boots (over it) to dress more mainstream but rather to just widen my input of music. Some things stick like Daft Punk, Jimi Hendrix or Slayer while other things get uninteresting after awhile and topple off to get forgotten. Sure we all have our personal taste but that shouldn’t keep us from appreciating things outside of our safety sphere. “I want it all and I want it now”. 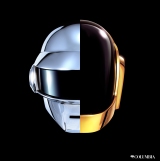 So anyway Daft Punk has a new album on the way, an album fans have been waiting for eight years to listen to. And I must admit that I feel an enormous hype for its release, maybe not as huge of an hype like the one I feel for Shane Carruths first film in nine years, but almost. The house-duo has dropped some second-long teasers from the album and now they are releasing a video-series. A bunch of moving pictures where the artist who are involved with the album gets interviewed about their relationship to the androids. Two has been released so far, the first one with an older Italian dance-music producer, Giorgio Moroder, and another with Todd Edwards, a younger American Garage and house-producer.

What are we on about?